Today we're launching the Weekly Leaderboard, a system that keeps track of the number of drugs sold and players arrested. It rewards the top three on each leaderboard every week with store credit, in-game money, an exclusive tag, and exclusive leaderboard stars. Check out the leaderboard in-game with /lb. 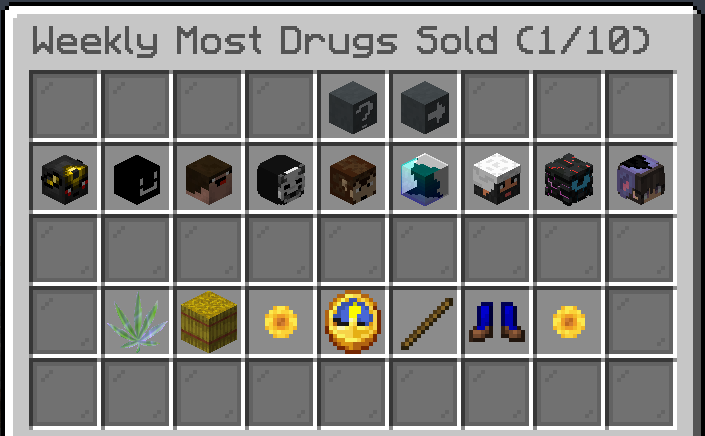 At the end of each leaderboard week (Wednesdays at 6PM EST) the top three players in both of the drug and police leaderboards earn rewards. The rewards include store credit (in the form of points), in-game money, leaderboard stars, and access to the exclusive dynamic leaderboard stars chat tag.

Leaderboard stars are a count of how many times a player has finished in the top three spots of the weekly leaderboard. Finishing in first place rewards three stars, second place two stars, and third place one star. The dynamic leaderboard stars chat tag shows the player's star count, with the colour changing the more stars they have. Stars (currently) have no further use beyond working as bragging rights to the players who earn them. Exclusive rewards at certain star counts, such as access to restricted abilities and areas, is planned for the future.

The Supply Crate III is now available! It includes the Exceedingly Rare Smuggler Stew, as well as a return of a favourite, the Lava Walkers. You can get keys for the crate from our store, or earn them in-game through /vshop and /bshop.

With the launch of a third supply crate, we plan to phase-out the the first supply crate. Keys for the Supply Crate I will only be available on the store for a few more days.

We will be hosting a second 1v1 PvP Tournament this Saturday after the drop party (around 7:30 PM EST). The event will be drop-in, so no sign-up is required, just be on the server around 7PM EST and we'll give instructions on how to join the tournament. The format of this tournament will be double-elimination, giving each player the chance to fight at least twice.

Everyone who participates in the tournament will also earn $100,000 and an exclusive chat tag each.

No members online now.
Total: 5 (members: 0, guests: 5)
About Us Welcome to MCLabs! The longest running farming server & pioneers of the gamemode
Server Store Store
Copyright © MC-Labs 2022. All Rights Reserved. We are not affiliated with Mojang AB.
Top