The 2021 MCDrugs reset is here!
​
Before getting into what's new, I'd like to thank the MCDrugs staff team for all of the time and effort they put into building, testing, and preparing the new map. The new Spawn is by far our most detailed and extensive yet. Our helpers, moderators, and admins put hundreds of hours of work into getting everything ready for you to enjoy. There were too many people working on the spawn to thank them individually, but if any deserve it, it's Hrby, who created the terrain that the rest of the spawn is built on, as well as many buildings and quite a few easter eggs, which we're excited for players to explore, and Diego, who built many of the buildings around spawn. Building a new spawn world each year is the bulk of the work to get the reset ready, and our spawns would not be what they are without this help.

This post is going to go into some word-heavy detail about a few of the major changes we made this year. If you just want a condensed overview of (almost) everything that is new, check out the reset changelog post. 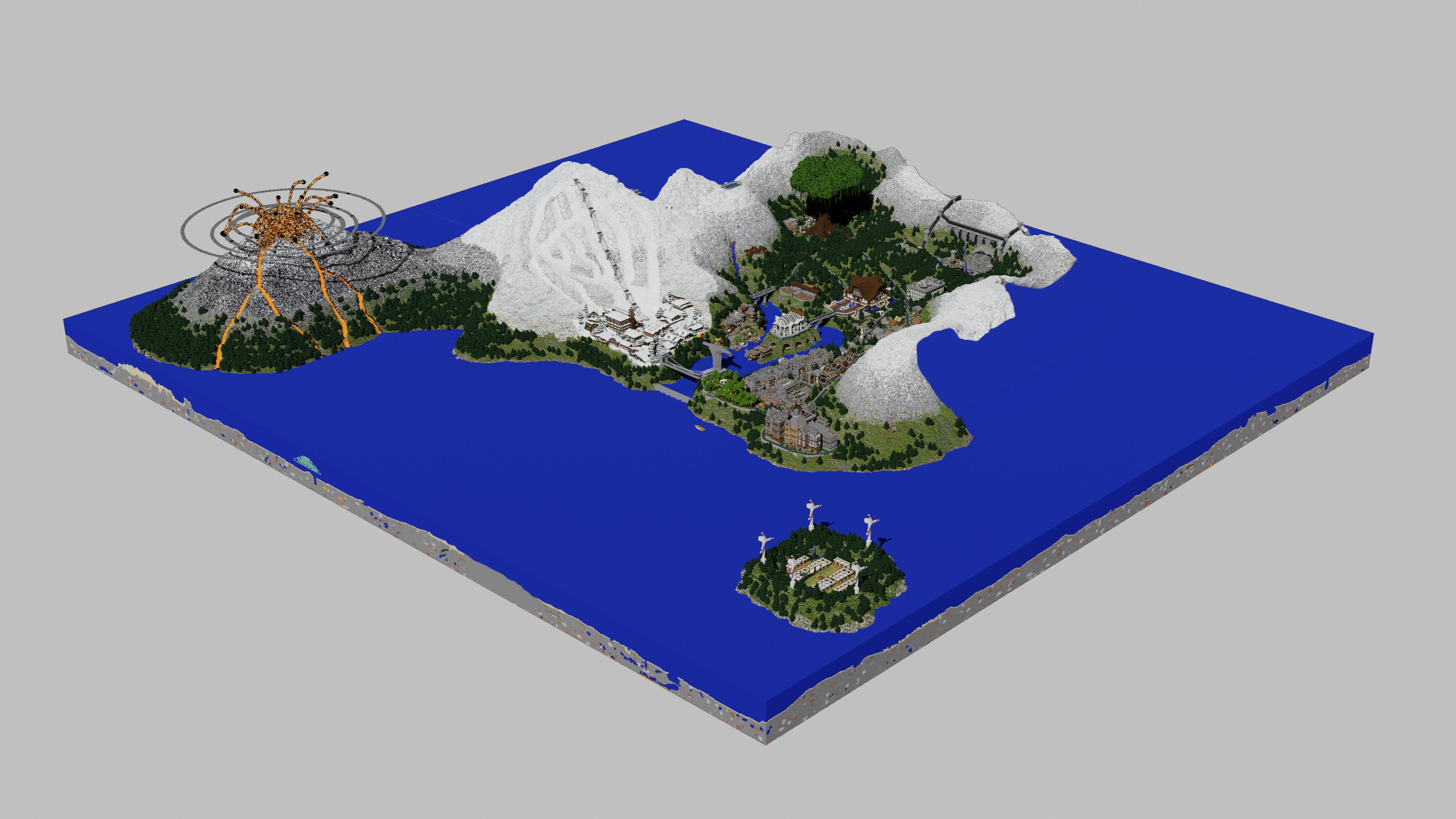 Unlike the last couple years, this year's spawn is completely fresh. It's inspired by Swiss geography, featuring massive mountains (including functioning skiing!) and thick alpine forests, along with some residential areas with European-style buildings. A few notable changes include:
There's many more changes in this year's spawn, and tons to explore - we don't want to give too much away right now!

With this map, we've updated to Minecraft 1.16.5! Performance concerns were the main reason for holding off on updating for so long, but performance is looking promising, if not better than last map. This also means that netherite is now obtainable, and any diamond item, including crate items, can be upgraded to netherite without the item's data being lost.

This also allows us to make view distance (the number of chunks that load and tick around the player) dynamic and dependent on the world’s TPS. Consistently high TPS will increase the view distance. View distance is displayed on the sideboard below TPS. If you are having trouble connecting to the server or you’re getting very high ping when loading chunks, reduce your render distance.

We were very satisfied with how the multi-world system worked last map. With the improvements that were made last year to smooth the transition between worlds, we feel that this system is the best way to improve server performance. We've made a few more improvements this year, such as getting potion effects to transfer between worlds, and allowing players to sell to player shops. Other than that, there's no major changes to how these worlds work from last map, it will be more of what you're used to.

Conveying information to new players about how the server works is always one of the most challenging parts of each map. Many players don't want to have to ready a tutorial to start playing, and it's difficult to reach the information when it's at a physical location in-game, and you're somewhere else. Helpers are very familiar with new players often asking questions that are plainly answered in the tutorial, so clearly our old tutorial system wasn't the best. The MCDrugs Wiki is our attempt to solve these problems. If you're familiar with navigating Wikipedia or other Wikis, the MCDrugs Wiki is very similar. We're still in the progress of transferring information and creating pages, but we hope to have pages for most of the features on the server. The Getting Started page is our replacement for the in-game tutorial, and contains a lot of useful information for getting started on MCDrugs.

If a wiki page exists, you can easily grab the link to it in-game with the /wiki <topic> command. Some pages can be accessed with a unique command. like the tutorial with /tutorial. Helpers will also find that they have access to a new command, /wikisend <player><topic>, which sends the specified wiki page link to the specified player. Similarly, the /sendtut <player> command can be used to send the Getting Started tutorial page link directly to a player.

The information on the wiki is very sparse at the moment, but it will slowly be populated with pages. If you are interested in writing or editing wiki pages, speak to Dakotaa for a wiki account.

With the launch of this map, we're also launching the MCDrugs Store Loyalty Points program. At the default rate, you will earn 5 points for every $1 USD that you spend on our store. These points can be redeemed for store credit vouchers at 100 points per $1 USD. These vouchers are coupon codes that will take the specified amount off of your purchase. For example, if you redeem 1000 points for a $10 voucher, and your cart is $10, you can redeem your voucher and get your cart for completely free. We will also be having point multiplier events, where the rate of earning points is increased. The first of such events will launch with the new map, with 3.0x Loyalty Points during the Map Launch Sale - that's 15 points per $1 USD spent.

Check your points and redeem them with the /points command in-game.

The first few weeks of the map are always very competitive - many players rush to be one of the first players to reach Drug Lord Status. This is going to be harder on the new map. The price of ranking-up hasn't been changed, but there is now a price to prestige. The first prestige is free, but subsequent prestiges have increasing costs. Bottom line, this increases the total price of clearing Master Prestige and reaching Drug Lord Status to $241,235,000 - roughly $100,000,000 more than previous maps.

We've added a few more benefits to prestiging, including Museum Busts and Prestige Signatures. You can read more about how these work in the reset changelog.

Also, 2.0x All Drug Price Boosters will not be available on the store until a couple weeks into the reset. You can still get 1.75x and 1.50x boosters.

With 1.16.5 and netherite, we've made some fairly major PvP-related changes. We've added Debuff Resistance potions, which can be brewed with a diamond (and made into splash potions with a gold nugget). These remove all debuffs and provide resistance to debuffs for four minutes when applied. We've also removed the cooldown for regular golden apples.

Duels have been added. You can request to 1v1 another player with select kits with the /duel <player> command in Spawn. Money and items can be wagered on duels.

Much of the casino has been improved this year. Casino loyalty rewards are back, with daily and weekly tier rewards. A few popular games were brought back, including Kitty and Jeff's Drinks. Some improvements were made to dogfights. Slot coins are now bought from The Cage again, through a GUI menu, which can be accessed from anywhere in Spawn with /cage.

The Tiger Casino has also made a return, featuring old favourites like Dimitry's finger guessing game, and Communist Coinflip. Along with these is a completely new gambling game, Russian Roulette, with a chance to win up to 6x your wager.

See more info about these changes on the full reset changelog.

We put a lot more effort into the museum this map than any previous map. Along with the new Museum Bust system, we've also added displays for the top three players in each mcMMO skill and each job, as well as a section for the top all-time, monthly, and weekly voters.

You can get to the museum with /museum, or teleport to specific sections with /museum <busts/votes/jobs/mcmmo>.

There are many more minor changes that you should be familiar with before getting started - read all about them in the full reset changelog.

Thanks for consistently maintaining this neato server
D

Total: 6 (members: 1, guests: 5)
About Us Welcome to MCLabs! The longest running farming server & pioneers of the gamemode
Server Store Store
Copyright © MC-Labs 2022. All Rights Reserved. We are not affiliated with Mojang AB.
Top