The long awaited Lab Wars II is here! We've made many improvements and additions to the Lab Wars format based on your feedback from the first one, and we're very excited for the next 24 days of Lab Wars! 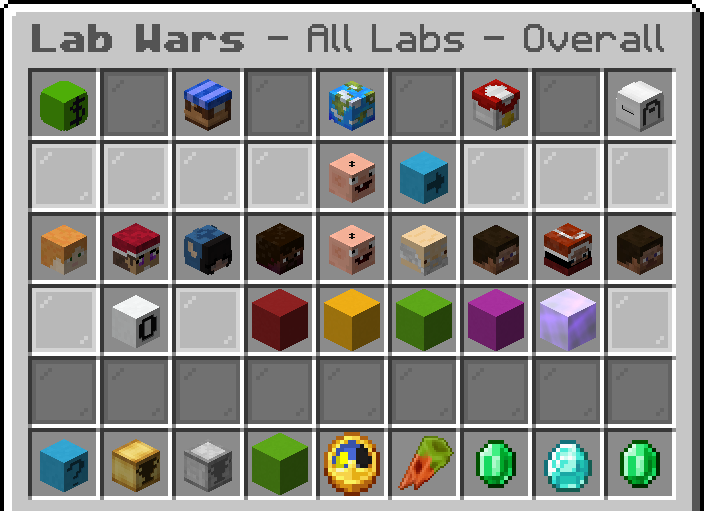 What is Lab Wars?​
Lab Wars is a collaborative, team-based event where every player on the server is recruited, at random, by one of four labs. Players generate revenue for their lab through many activities on the server (selling/running/supplying chems, arresting players, fishing, killing mobs in The Pit, competing in events, voting, and lab investments). All generated revenue is tracked, and the top players and labs can be seen in the Lab Wars leaderboard (/lw). There are tons of rewards for the top 3-9 players every day, phase, and overall at the end of the event, including over $1,500 in store credit and $250,000,000+ in in-game money.

Lab Wars will run until February 16 in four main phases. The first phase is Phase Zero, a short "pre-season" lasting a few days to give players the opportunity to get into a lab and get familiar with the event. Phase One begins on Wednesday, January 25. At the end of the first and second phases, the lab with the lowest revenue generated that week will go bankrupt and be eliminated from Lab Wars, resulting in all of their employees being assigned to the remaining labs.

The first time you do something on the server that generates lab revenue, you will be recruited by one of these labs at random. Once you're in a lab, your lab's symbol will show next to your name in your chat messages, and you'll get access to your lab's chat tag, private chat channel, and nickname colour.

Each lab has its own channel on our Discord, linked to the lab's in-game chat channel, and you'll get access to your lab's channel as long as your Discord account is linked (/link in Spawn).

What's The Same As Lab Wars I?​
A few things were left unchanged, such as how dividends and investments work. See the original Lab Wars post for more info on these, and for more info on Lab Wars in general if this is your first one. 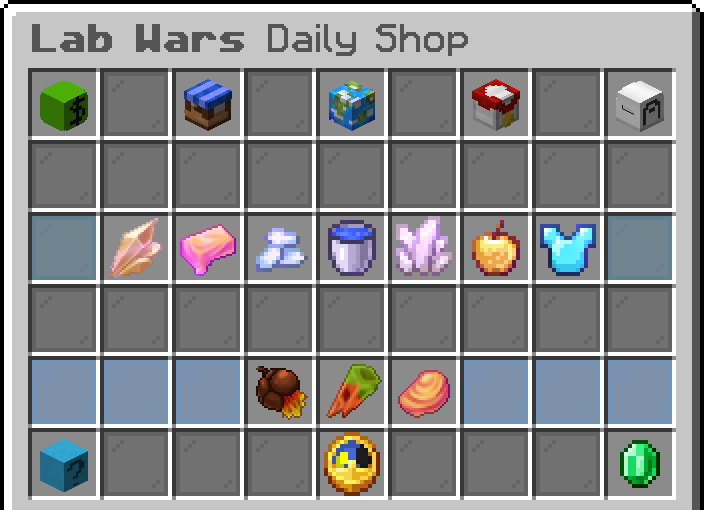 The Daily Shop creates a way to spend your lab revenue. Spending your revenue does not remove from your or your lab's overall revenue - think of it as a separate balance that's increased by generating lab revenue. The shop will have seven items each day, offering a mixture of personal, lab-wide, and global benefits. Your revenue balance resets at the end of each phase, so make sure to use it!

Revenue Milestones don't need much explanation - they work just like leaderboard milestones. There are a set of milestones for each day, each phase, and overall. Hitting milestones by generating lab revenue grants rewards that will help both yourself and your lab. Milestones will be enabled starting Phase One! 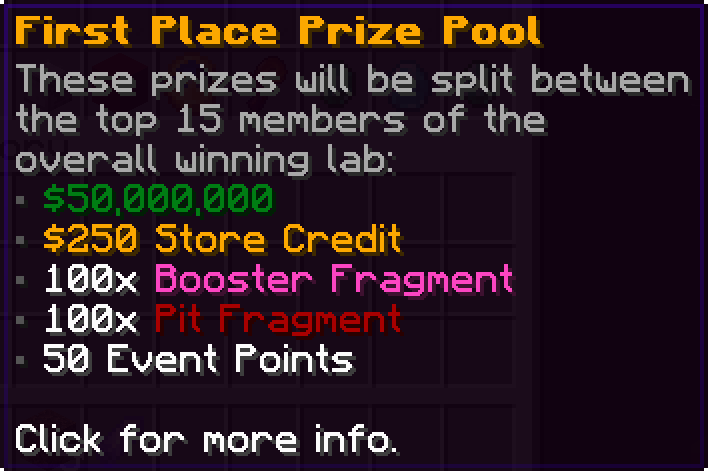 Reward Improvements & Prize Pool​
We've made a ton of improvements and additions to the rewards at every point in the event. This includes the addition of store credit rewards, new Booster, Pit, and Crate Bribe fragments, high-value boosters, more money, and more. A complete view of the rewards throughout the event is available here.

In addition to improved rewards throughout Lab Wars, we have added the prize pool. At the end of the final phase, the winning and runner-up lab will each earn their own reward pool. These pools are split between the top 15 players of each lab, based on their overall revenue share among the other 14 (so even if you end up on a differnt lab for the final phase, your revenue generated while in your original lab still counts towards your prize pool share). The winner prize pools includes $50,000,000, $250 store credit, and a ton of fragments.

Bounty Chems​
Every hour, a base chem is selected as the bounty chem. For the next hour, selling this chem or anything made with it will reward bonus revenue and prestige progress.

We've made some improvements to the chem bounty system. Now, only base chems are considered for bounties, and there will be no repeats until (most) chems have been the bounty chem. When a base chem is the bounty, all chems made with it are also boosted.

Revenue Boost Goals​
By far the biggest complaint about the first Lab Wars was the revenue boost events, which, in hindsight, were far too powerful. We've completely rethinked this area, and server-sponsored revenue boosts are now triggered by community revenue goals. Once the goal is hit, a random revenue source will be boosted by 1.5x for one hour (the same source can not be boosted twice in a row).

Revenue Changes​
We've taken the feedback from the first Lab Wars into consideration, and made some changes to revenue sources:
More details on the revenue rates can be seen with /lw rates in-game.

Draft Format​
When a lab goes bankrupt and is eliminated from Lab Wars, its members are absorbed by the remaining labs. While the re-assignment is random for most players, the top players of the eliminated lab will be re-assigned by draft-auction.

At the end of each phase, the remaining labs will be asked to make a priority order of the top players of the eliminated lab, based on who they'd like most in their lab. These players will then be assigned to their new labs based on this order. We might change the draft up a bit for each phase, info on that will always be announced beforehand on Discord.

Lab Chat​
Each lab now has their own private chat channel in-game, removing the need for players to create their own lab group chats. You can speak in your lab's chat channel with the /lc command. These chats are linked to the Discord channels for each lab similar to how the #ingame-chat channel works. Make sure to /link your Discord account in Spawn to get access.
Last edited: Jan 22, 2023
You must log in or register to reply here.
Share:
Facebook Twitter Reddit Pinterest Tumblr WhatsApp Email Share Link

Total: 9 (members: 1, guests: 8)
About Us Welcome to MCLabs! The longest running farming server & pioneers of the gamemode
Server Store Store
Copyright © MC-Labs 2022. All Rights Reserved. We are not affiliated with Mojang AB.
Top